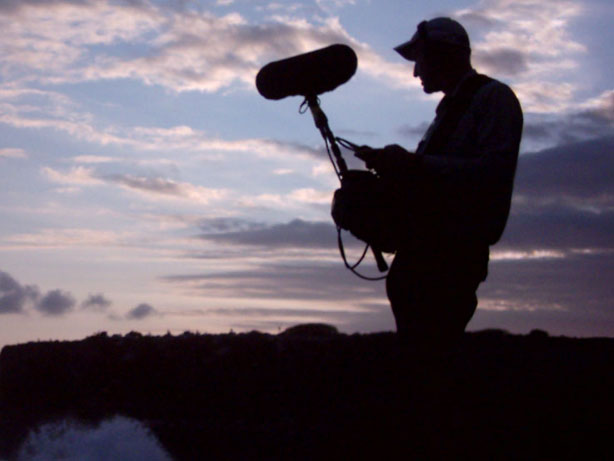 This year marks the 100th anniversary of Benjamin Britten’s birth. Aldeburgh Music is celebrating this with a year long series of events based in and around Britten’s home from home, Snape Maltings, as well in his home town of Aldeburgh. Britten used to walk every afternoon around the countryside near his home, the Red House, on the outskirts of Aldeburgh, in order to help distil his thoughts, and to further inspire the pieces of music he’d spent the morning composing. Friday night’s event investigated this link between Britten’s environment and his habits. Three diverse areas of music were brought together under the title “Roots – Journeying Home” and the pre-performance talk in the Peter Pears Recital Room was the perfect introduction for what was to unfold.

Chris Watson lives in Northumberland (“The same coastline, but 300 miles north”), but at the start of his talk he divulged that his grandparents lived in Lowestoft and he used to spend most of his summer holidays exploring the coastline and habitats of Suffolk and Norfolk – some of the same areas that Britten explored. Having met Britten’s nurse and chatted about his daily routine, Watson felt a desire to capture the quintessence of the walks he routinely took. He noted that Britten purposefully kept away from the coastline, well away from the more obvious routes that were crowded with other walkers and dominated by the sound of waves breaking on the shingle beaches. Instead, he kept inland where the noise, for want of a better word, wasn’t as overpowering. It was the bird calls (Britten was an accomplished ornithologist) and the rustle of grasses and leaves which had served to help Britten’s thought processes.

What Watson captured, for this installation piece, were those sounds that would have accompanied Britten as he walked. As he pointed out, fifty years in evolutionary terms is very short, so the sounds of the wild that he collected will almost entirely be the same as those Britten experienced. A beautiful map was presented to the audience before the show that highlighted the route, season and the four key habitats covered during the course of the forty minute piece. These were then projected on a large screen, almost as chapter headings.

There were two key factors that made this performance piece superior to what could easily be described as a playback. The first was the contribution of Oliver Coates, a cellist who was asked to provide some of Britten’s music to play within the installation. Initially he picked something from Britten’s extensive repertoire of solo cello pieces, but was looking for the right moment to play it. Once he’d heard the explosive call of the nightingale that Watson had recorded (at 4am, sitting in his car as it was too cold to be outside), Coates decided that was his cue. It worked beautifully – as spring erupted, so too did the dawn chorus led by the overbearing nightingale, oblivious to all around it, joined by Coates’ spirited cello, the pair dancing with one another, the cello never overpowering Watson’s soundscape. It was as if, on your walk, you had happened upon someone practising in a neighbouring garden, adding a level of awe and wonderment to proceedings.

The second factor was the specialism of Tony Myatt from the University of Surrey, which was responsible for the technological wonder of the performance: spatial audio programming. The scope of the bespoke sound system installed in the hall was revealed during the talk beforehand: twenty speakers, split between the floor, head height and ceiling, developed to give an accurate spatial representation of the environment in which Watson had recorded the sounds. The audience were encouraged to walk around during the piece (though being careful to make the minimum of noise) and mats were left on the floor for those who wanted to lie down, close their eyes and get lost in the sounds. What was truly amazing was how this technological development enabled you to completely immerse yourself in the habitats and environments that were being represented. 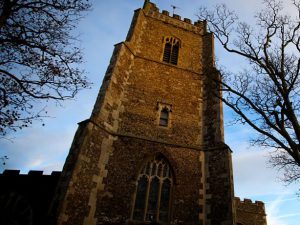 Walking around the room my awareness of the birds, animals and environment changed. I moved away from the goldfinches chirping to my left and headed towards the pealing bells of Aldeburgh Parish Church. The trees swayed behind me, the wind rustling their leaves. Then there was that nightingale – you couldn’t escape that, the way its song dominated the entire landscape. It was a phenomenal experience – closing my eyes completely removed me from the confines of this large, foreboding hall and I was outside again, wrapped up against the cold, a robin chirping in the hedge next to me. What was most unnerving was when something alien appeared, like a roll of thunder, the bark of a fox or a crash of a wave, and I found myself glancing around nervously, as if that very thing was right next to me.

Britten frequently composed without the need of a musical instrument, and you can imagine how these natural sounds would have inspired him. He lamented the encroachment of noise pollution at the Red House, and he eventually had to leave – his keen ear for sounds and textures becoming tarnished and disrupted by the increased levels of unnatural noise. This piece might be one of the less obvious events as part of the Britten Centenary, but it’s actually one of the most important. It has captured something of Britten the man: someone who valued the natural world in which he lived and worked. There are elements of inspiration in this environmental soundscape that Watson has so amazingly and accurately captured, but it also serves as a way of understanding how Britten dealt with the trials and tribulations of his music and his life.