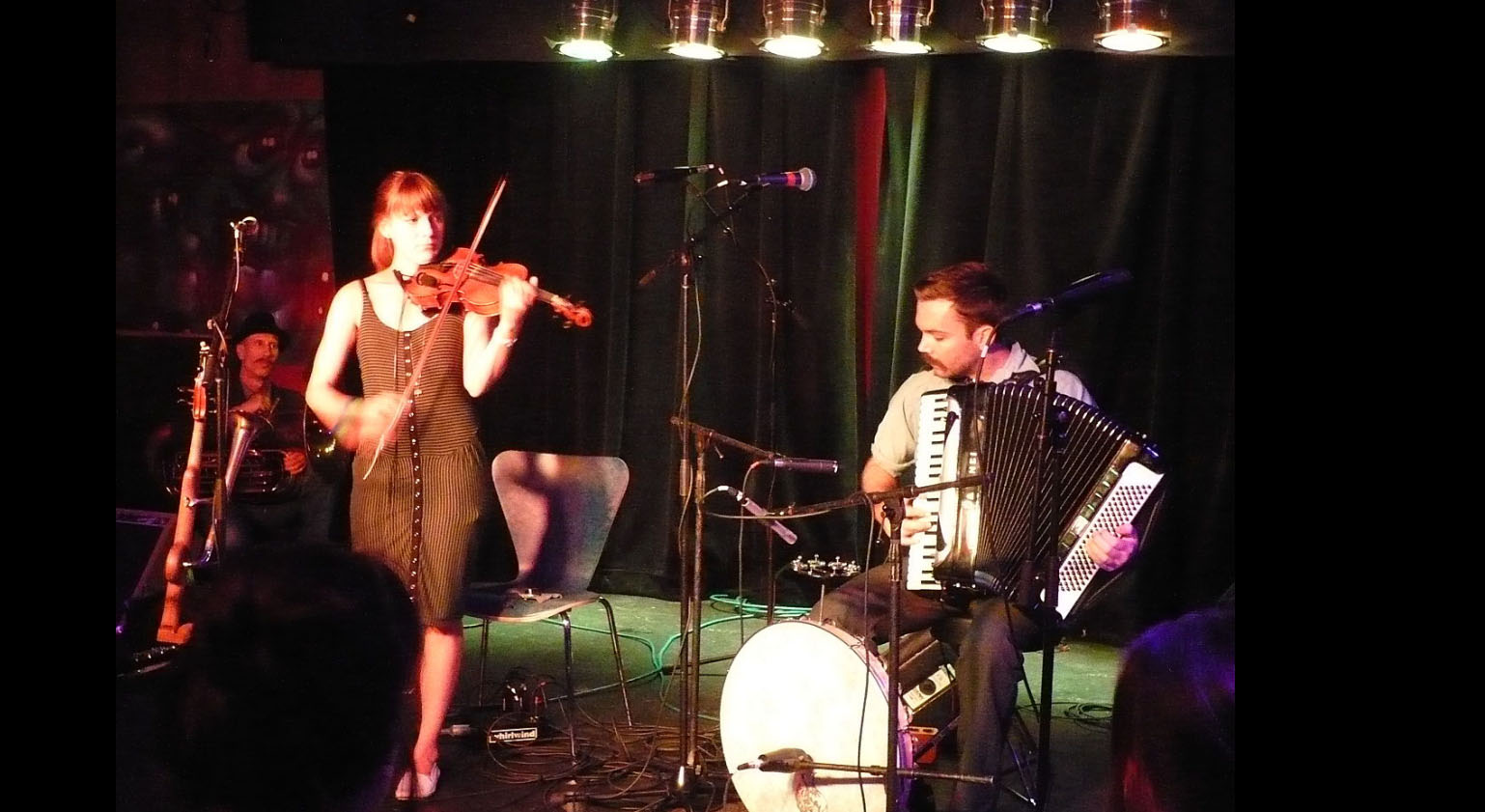 A Hawk and a Hacksaw is New-Mexico based duo Heather Trost and Jeremy Barnes, the latter of which has been performing and recording under this name for almost a decade. Often seen or heard in collaboration or performance with other equally respected musicians – Beirut, Wilco, Calexico, Andrew Bird – the pair introduce and seamlessly integrate traditional Eastern European music to the otherwise regular semiotics of the folk soundscape.

The band’s name is said to come from the Miguel de Cervantes book Don Quixote, and was later used by Shakespeare in Hamlet: I am but mad north-north-west: when the wind is southerly I know a hawk from a handsaw. The “handsaw” was replaced by “hacksaw” in reference to Turkish and Balkan metrical music unit, Aksak. And the cultural and literary references don’t stop there: their self-titled first album (2002) was the soundtrack for Astra Taylor’s biopic of philosopher and critical theorist Slavoj Žižek, Zizek! Their latest album, You Have Already Gone to the Other World, was written initially as companion pieces to Sergei Paradjanov’s 1964 Shadows of ForgottenAncestors.

Made up of pieces that have formed a large part of the duet’s touring repertoire for the last several years, their latest album was never initially conceived as such. As a concept it was initially performed in Minehead in March 2012, at the All Tomorrows Parties festival (curated by Jeff Magnum of Neutral Milk Hotel). That it has found its place in this format speaks of the substance and notoriety of the compositions that make up the album.

At large, Paradjanov’s film is about love and loss, nihilism and unrequited love (in no particular order). Similarly, You Have Already Gone to the Other World explores both the musical traditions and sentimental tropes of the same period in Ukrainian history, and could easily be listened to as a companion to the film. And yet, although the album takes samples from the film proper, the attention and homage to the traditional Ukrainian music used in the film sees Trost and Barnes utilizing their instruments of choice in both new and nostalgic ways.

The titles of the songs hint that these individual units are loosely based on particular scenes: titles like “Oh Lord, Saint George, bewitch Ivan, make him mine”, “On the River Cheremosh” and “Where No Horse Neighs, and No Crow Flies”. At times, the duo have taken to recomposing the music from the film; at other times, they seem to have used the themes from the film to compose their own musical interpretations, using the film as the point of appropriation or inspiration. There are several pieces that stand up as musical compositions in their own right. “The Snow in Kryvorivnya” is a beautiful and simple piano duet, loaded with maudlin allusion; “On the River Cheremosh” leads off with some sampled dialogue from the film, and uses traditional Balkan instruments (gaida and tambura) to paint a demure and melancholic meditation of some later parts of the film. In other moments of the album, the bombastic piping and string harmonies are set against a backdrop of church bells and cacophonic and complex percussion rhythms. The title song of the album, track 2, opens with romping percussions, is busy and loud and calls to mind Eastern European bazaars or market places, or perhaps more accurately, the soundtrack to a film like Black Cat, White Cat, for example. Or even just your local kebab shop on a late Friday night, when the owners are so fed up with the drunkards they decide to turn the music up to drown out the horror of sobriety.

Which is not to discount anything on this album. Rather, to conjure something of how someone in the west might come to understand something like this. I saw the duo perform here in New Zealand a number of years ago at the International Arts Festival, in a temporary marquee on Wellington’s waterfront. After the show, my boyfriend and I went to a Creole restaurant down the street, where we sat across the room from Trost and Barnes. At the end of our meal, my boyfriend went up to them and told them how much he’d enjoyed the show. They blushed, smiled and responded gracefully. I’m not sure who was the more awkward—the two of them or my boyfriend. What I’m alluding to (with such an anecdote) is the sense of authenticity, the actual talent, energy and creativity being harnessed in an act like A Hawk and a Hacksaw. Where other bands have drawn on Balkan traditions to bring a fresh sound to our popular versions of folk music, these guys remain stubbornly pure—they’re absorbing this stuff and recreating it with substance and potency. And we, the listeners, are all the better for it. Even down here, in the far reaches of colonies. Especially down here.